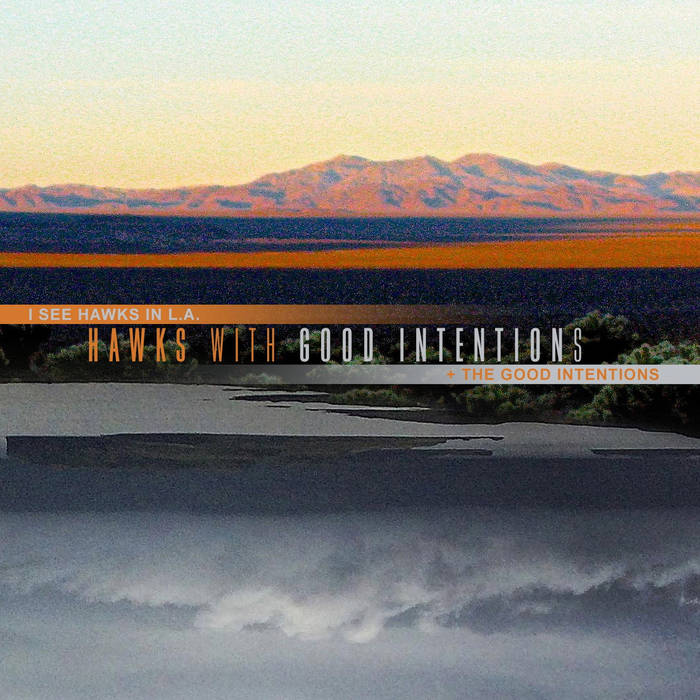 gvittek I love your new CD!

Paul and Victoria from I See Hawks in L.A. first met Peter Davies and Gabrielle Monk of The Good Intentions at a house party in the chaparral foothills of Sierra Madre, CA. The Liverpool folk duo and the psychedelic west coast country rockers soon became fast friends, sharing stages from UK folk clubs to Pappy & Harriets in the California high desert.

One evening in Hawks lead singer Rob Waller's Highland Park garage studio, Rob, Paul Lacques and Peter sat down with guitars and some trepidation, suddenly out of their comfort zones, and came up with the beginnings of "White Cross" and "Rolling The Boxcars," amidst much laughter and the chaos of the Waller children.

After this promising start and the Liverpudlians' return to Liverpool, the songwriting process migrated to the cold digital theater of the internet--lyrics and mp3s bouncing back and forth across the Atlantic by the hundreds, nestled amidst internet spams and bank statements. The irony of creating heartfelt folk music through cyber connection was not lost on any of us.

As the email threads mushroomed, the Hawks and Good Intentions discovered the subtle and at times gaping differences between English and American musical sensibilities, phrasing and idioms, as well as quirks (defects?) in their own personalities and hardened songwriting habits. Both groups shared an appreciation for nuanced shadings of words, and tiny but dire quibbles on a single word or phrase accompanied every stanza. The heated if wit-defused discussions were a learning experience for all, including Hawks bassist Paul Marshall and drummer Victoria Jacobs.

What emerged was a song crafting process more deliberative and careful than the Hawks have ever been disciplined enough to undertake.  Where Paul L and Rob often revel in their reckless irreverence for traditional forms,  Peter employs a more careful and thoughtful process. The results were different from songs either group had written before. The CD, beautifully mixed and mastered by four time Grammy winner Alfonso Rodenas, is sparse and lush.

The Good Intentions are one of UK's top foik bands. Peter Davies and Gabrielle Monk have been voted Best Americana Band by the British Country Music Awards. They've released four albums produced by L.A.'s own Rick Shea with the cream of the crop of L.A. roots musicians.

I See Hawks In L.A. have released eight critically acclaimed CDs since their high desert conception 20 years ago, and were named to MOJO Magazine's 2018 Top Ten Americana Releases for "Live And Never Learn." They were just named Best Country Band in Los Angeles by the L.A. Weekly.

Produced by I See Hawks In L.A. and The Good Intentions
Recorded by Paul Lacques, Alun Parry, Paul Marshall, and Brian Roberts
Mixed and mastered by Alfonso Rodenas
Artwork by John Curry

I SEE HAWKS IN L.A. formed in the first year of the 21st century on a desert journey that has led to seven releases, UK/Europe and U.S. tours, and way too much fun. Alt country folk rock with rich harmonies and a way outsider approach to Americana. See them live! www.iseehawks.com ... more

Track Name: Blue Heaven
Do you remember the times when we used to say
That there was nothing but songs and dreams and days
We had guitars and we flew with the Hawks, and hey

It was blue blue heaven

We hit the road on a bright blue September day
We made our money and we spent it in the same cafes
Got a sweet ride from Austin to Asheville, and hey

We didn't mind when the weather didn't go our way
Cold nights were mellow with the kindness of strangers
We had a little tune that would make our fortune, and hey

When the big old birds would fly towards the horizon
It was time and we would follow
Pack it up and say goodbye
Start again
I see them soaring over me
Like it was yesterday
Sometimes I swear I'm ready to
Rise up and fly away
Track Name: Things Like This
395's a mighty long road
Runs straight as a broken arrow
South from the edge of Canada
Lonely to Hesperia
That's California

Well the Saginaw Chippewa welcomed me in
To the new Soaring Eagle, like an old long lost friend
Turned my last pay check into green chips and gin

Digging for copper on the Yellow Dog Plains
Kennecott's got me for a year and a day
But tonight's alright, I'm the shooter again

I kept throwing numbers, Big Red stayed away
I was the hero, king for a day
The eye in the sky didn't see things my way

Fifty on the yo, stickman's got to go
And the house always knows when to mess with my mojo
When I threw the first punch, it was the last thing I'd throw

Isabella County Jail is mighty cold when you can't make bail
They were on me so fast, covering the cash
At least I'll never go down that black mining shaft

For a year's good behavior I'll be back on my way
And the warden says "Boy, keep a-counting your days"
But there's a game on the yard if you've something to play
Track Name: Rambling Girl
Don't you fall in love with a ramblin boy
That's what your mama said
He will take you to the fallen side of town

Granite hills and avalanche
Above the Donner Pass again
A hundred yards of boulder stopped the C.P. cold
The west was won with blood and bullets
Letters forged and triggers pulled
It only took 100 years to pacify

CH
Track Name: Flying Now
My bed has been made
With the last of my dreams
I can see a few stars
Through the wind in the tree
I'm flying now

I just might grow old
My face carries the lines
Of the winds that have whipped me
Now they push from behind
And I'm flying now
Flying now
Track Name: Epiphany On Town Hall Square
Epiphany on Town Hall Square
Just another lonely winter dawn
Don't you wish that you'd been there
When a holy child was born

Why'd he come in still of night?
On darkest day, in lowest light?
Never like the lilies will I be
And my childhood grips me still

I See Hawks in L.A. recommends:

Bandcamp Daily  your guide to the world of Bandcamp